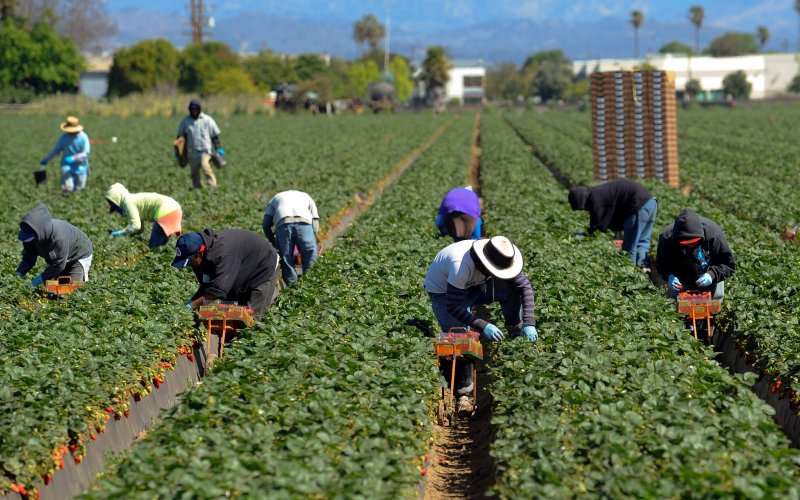 Immigrant workers in a field. Photo courtesy of Gus Ruelas/Reuters with The Daily Beast

Over the course of the 2017 presidential campaign, Donald Trump proposed numerous policies to be implemented once becoming president. Now in office, President Trump’s immigration and trade policies specifically could affect more than just immigrants and tariffs.

The agricultural industry is indirectly tied to both topics, which could negatively impact production and trade with the policies’ implementation. Immigrants, both legal and illegal, play a significant role in the agricultural industry. According to AgWeb, the Department of Labor estimates 53 percent of the 2.5 million workers in the U.S. are illegal immigrants.

Darren Hudson, Ph.D., professor and Larry Combest Endowed Chair for Agricultural Competitiveness in the Department of Agricultural and Applied Economics at Texas Tech, said there are indirect effects to supply from the proposed policies because fewer immigrants mean less production, which increases costs.

“I think when you talk about pure immigration, agriculture uses a lot of migrant labor, especially in fruits and vegetables, but in other ag production sectors as well,” said Hudson, who is also the director of International Center for Agricultural Competitiveness. “Any disruption in labor availability obviously is going to rein costs for producers. This is often framed in terms of illegal immigration, but the reality is, legal immigration is stymied as well.”

Benjamin Powell, Ph.D., director and professor of economics in the Free Market Institute at Texas Tech, said Trump has misrepresented problems associated with immigration, and they increase native citizens’ income.

“The overwhelming majority of these 11 million people are making Americans wealthier,” Powell said.

Hudson said legal and illegal immigrants are a net-positive to society. He mentioned although they are in the U.S. illegally, they have fake social security numbers playing into the system. Through that, they are subsidizing U.S. citizens by not having social security benefits through the tax money they pay.

“A 20 percent tariff on Mexican imports would have a direct impact mainly because they’re likely to put retaliatory tariffs on it,” Hudson said. “So on the one side, products coming into the U.S. will be more expensive for U.S. consumers, so it’s going to adversely affect us and products going out if they put these tariffs on there.”

The concern for farmers and ranchers in the U.S. is the impact a tariff could have on them locally. Hudson said Texas agriculture is more likely to be affected because agricultural products are one of the largest shipments to Mexico.

On a local scale, Lubbock could be impacted since most of the agricultural products are exported to Mexico.

Hudson said the largest industries impacted by trade disruptions would be livestock because of the movement of livestock products back and forth across the border.

“You can have tariffs without changing immigration policy, and you can change the immigration policy without having tariffs,” Hudson said. “Both of them will have some impact on agriculture. Put them together, and it’s a big impact.”