Peanut harvest had just started in Shallowater, Texas. Dust was rolling through the air, and the headlights of the combine could be seen for miles. Inside the Furgeson house, a newborn had broken out in hives, with her belly and legs covered in whelps.

Landri Furgeson wanted to be like most kids who grow up on a farm. She would have the entire field as her playground. The tractors, sprayers and combines would allow her imagination to wonder.

The Furgeson family has a diversified crop operation on farms in Terry, Bailey, Cochran, and Hockley counties. The bread and butter of the family farm is cotton, grapes for their winery and peanuts — a staple rotation crop for the West Texas soil. The family, however, would have never dreamed their peanut crop was a threat to their daughter.

When Landri was three months old, peanut harvest was in full swing, and she started developing extreme eczema.

Traci, Landri’s mother, kept thinking her dry skin was just cradle cap. Her scalp was exceedingly bad with eczema, something that is not normal but also not uncommon for a newborn. The Furgesons were eventually referred to a dermatologist who noticed Landri’s dry skin was out of her control and urged them to see an allergist soon.

“Around seven months, Landri did a blood test that came back she was allergic to oats, peanuts, eggs and tree nuts,” Traci said. “The allergist made the comment that most children grow out of allergies, but this was affecting her daily life. So, something needed to be done.”

Landri was 10 times more allergic to peanuts than any other allergy, said Landri’s father, Anthony Furgeson.

During the fall of 2016, Traci said she started thinking about Landri starting school soon. This thought terrified Landri’s parents.

“It was kind of scary when you think about peanuts and how kids are so dirty,” she said. “How do you know if anyone has peanuts on their hands and then they are touching the toys?”

Anthony and Traci said they tried to remove Landri and themselves from their 1,000-acre peanut farm as much as possible. Traci said Anthony would have to take his clothes off in the garage after coming in from the peanut fields, place them in a container, and go straight to the shower to assure no peanut dust was ever in the house.

“Christmas parties or Thanksgiving were also scary,” Anthony said. “[But] we didn’t scare her to death about peanuts, if we did see something, we would just remove her from the situation.”

Traci said she was looking at a Facebook group she joined one day for parents with kids that have a severe peanut allergy. She said she kept seeing the term “OIT” and wondered what it meant.

OIT stands for oral immunotherapy. For children with a peanut allergy, it involves gradually increasing amounts of peanuts each day. According to the Kids with Food Allergies organization, OIT requires strict and careful supervision of a trained allergy specialist.

Traci said she started doing research about OIT and called around to see who offered the treatment. Currently, no one does this treatment in Lubbock, the family added. The family eventually found a doctor in San Antonio.

The Furgesons loaded up for their first OIT meeting in San Antonio in October 2016. Traci said she remembers being so scared and overwhelmed by the experience, but she and Anthony kept faith this would help Landri. At the time, Landri had just turned four, and the family was prepared for the routine change.

“OIT is not a short game,” Anthony said. “It’s not something that you do for a year and then you are cured. We had to go into this treatment assuming that Landri would have to eat eight peanuts for the rest of her life every single day.”

According to the Kids With Food Allergies website, early clinical trials have demonstrated OIT is safe and has a success rate of 70-80 percent in patients that are properly watched in a controlled environment.

As for Landri, her treatment started off by introducing her to 2 milligrams of a peanut in a liquid form. That was just the first half of the treatment. The family said building up to one whole peanut was the hardest and longest part.

The second half of the treatment for Landri was eating one peanut twice a day and eventually eating 12 peanuts a day in a 12-week span. Anthony said her final challenge was to eat 24 peanuts in one sitting at the doctor’s office.

“OIT is different for every child,” Traci said. “[For] some kids it takes many years to do what we did in a year. Even though Landri is eating peanuts each day she is still an allergic person.”

The family also stressed following the protocols is key to success.

“That’s the nuts and bolts of this treatment,” Anthony said. “You’re giving your child something that could potentially kill her.  But as long as you follow the rules and stay within your protocols you should be safe. That doesn’t mean that she still can’t have a reaction.”

One year after Landri started her treatment, an emotional Traci said it was a moment she would never forget. Landri was able to sit in the doctor’s office and eat 24 peanuts in one setting with no problems. She had graduated into what the doctor called “maintenance”. In maintenance, Landri must eat eight peanuts once a day, every day.

As a family, we went April to October, 26 trips to San Antonio for seven months, Traci said. It was just one of those things that was so important to treat.

Now that peanuts are in Landri’s daily diet, Traci and Anthony said they don’t have to worry anymore.

“The fragrance allergies, the protein allergy in the air all went away,” Anthony said. “That to me was when I could step back and know everything would be okay.”

If the treatment would have not worked, Anthony said Landri could not go to the farm and Traci’s brother would continue to head up the peanut harvest—a quick fix to the ultimatum.

As for Landri, who can now take supper to the peanut fields with her mom, will continue her routine of eating eight peanuts a day. A life change that Anthony said will not keep her from living her energetic life.

“Life dealt us these cards, but I never wanted Landri to feel sorry for herself,” Anthony said. “This is not a disability; your peanut allergy does not define you. She is brave and will keep doing whatever she wants, but she will just have to eat a peanut every day. That is her vitamin.” 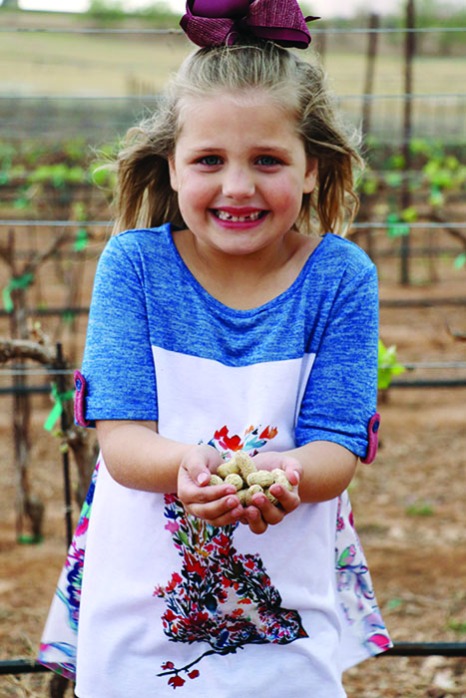 Landri is now able to hold and eat peanuts and is currently able to eat eight whole peanuts. 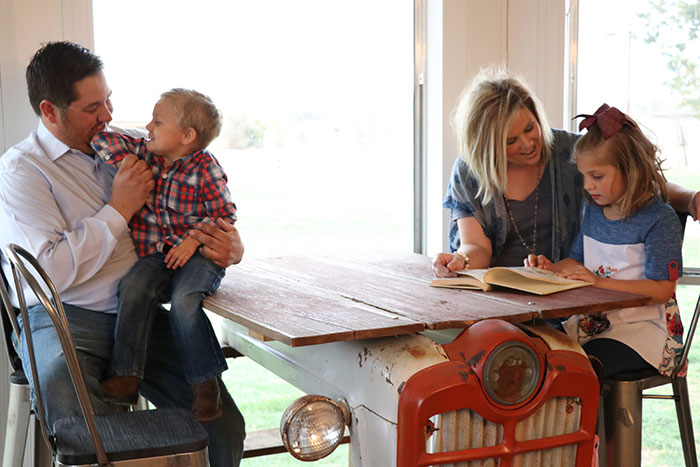 Since the Furgeson family is very active in running the family winery, farming and school, the family unwinds the day by reading and talking at the dining table.