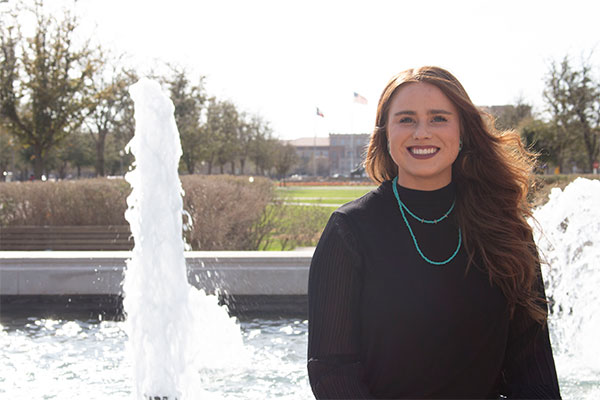 rom a town population of 2,000 people to a city of 250,000, Ciera Ware was excited for her college experience at Texas Tech University. However, she never realized how much her passion for farming could grow.

Ware, a senior at Texas Tech University, grew up helping on her family farm in Ralls, Texas. When she was preparing to come to college, her dream was to go to law school, so she decided to pursue a major in agricultural economics. She felt this major was a smart choice for her because she would be able to continue to law school after graduating, while still studying within the College of Agriculture and Natural Resources. After a semester of pursuing this major, however, she figured it was not a great fit for her.

“I went into college my first semester an agricultural economics major and thought I was going to go to law school,” Ware said. “I found out pretty quick I hate economics. I’m not good at it.”

Soon after realizing she was not wanting to continue on her path of going to law school, Ware decided to change her major to plant and soil science. She was beginning to see her passion for agriculture and farming was far larger than she realized.

Throughout her sophomore year in college, Ware got the opportunity to accomplish one of her goals; she was able to learn Spanish while she studied abroad in Peru for a semester. When the opportunity presented itself, she did not want to pass it up, so during the spring semester of 2017, Ware got to experience what it was like to live in Peru through the culture’s perspective. Her time in Peru though did not just help her accomplish one of her goals, but she began to see who she was as a person.

Ware believed her experience in Peru really shaped her as a person and helped her gain a new perspective outside of what she considers ‘the West Texas bubble.’ She began to learn how different it was for them when it came to their views on agriculture and reliable food sources compared to what knew. It also showed Ware how important it was for her to advocate for agriculture.

Building Relationships for Her Future

After continuing through college for the next year, Ware received an internship with Winfield United. Tim Cooper, the district seed manager for the West Texas and New Mexico region, explained the internship was a 12-week program, which involved a large amount of networking.

“They learn how to deal with people, how to meet people, and then how to sell to people,” Cooper said.

Cooper explained when he was interviewing candidates for the internship, it was not an easy process, because he wanted to make sure he found the right people to fill the spots. Ware however, stuck out to him after interviewing her for one of the positions.

“She was so intelligent. You could tell that she had a passion for agriculture.”

Ware explained the internship and a few other experiences really helped her understand how important it was to build relationships and to network as much as you can. Her time during the internship also helped her gain more knowledge on what she can do when it comes to her beginning her own operation after graduation.

Advocating in Her Way

Toward the beginning of her senior year at Texas Tech, Ware began a podcast, Farming on Mars, as a way for her to advocate agriculture to others, by using the relationships with farmers and researchers she has built over the years. Ware feels her podcast is giving farmers and researchers an outlet to share what they want to without having to summarize their story for them.

“Through the podcast, they get to tell their own stories in their own words,” Ware said. “It’s not me telling their story for them.”

It is not only fun for Ware to sit down and interview farmers and ranchers for her podcast, but it has given her a way to advocate for agriculture in her own way. The podcast is also allowing her to give people who wanted to listen a long-demand format, which you can listen to whenever or wherever you want to. For her it was really important to use a podcast as the format because she thinks that there are not enough on-demand agricultural outlets out there for people to get involved with.

Headed Back to Her Roots

Now that she is getting closer to graduating college in May, Ware is excited to have been given the opportunity to rent land near her family’s cotton farm, so she can begin her own operation close to home.

“Basically, what I want to do is model my operations based off my dad’s, because I really like how he focuses more on quality versus quantity.”

Ware cannot wait to begin her journey farming after graduation and feels her college experiences and the connections she has made have only reassured her more that she is making the right decision for her future. She has been able to gain a new perspective on agriculture, gain connections, and has begun to advocate for agriculture. After all of these experiences, Ware is ready to follow her passion which was there ever since the beginning.