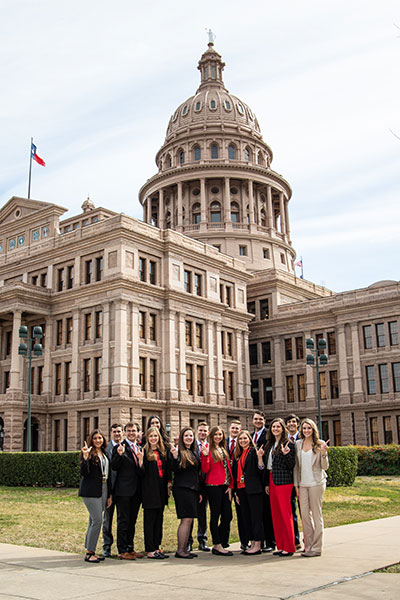 CASNR MILE students travel to Austin, Texas, for one of the many trips taken during the program. Photo Courtesy: Lindsay Kennedy/ Ph.D.
L

Leadership is defined as one who inspires and motivates action; having a can-do personality and strong leadership skills; one who encourages change. Some synonyms include guidance, direction, authority and management. Texas Tech University’s College of Agricultural Sciences and Natural Resources has as leadership program, the Matador Institute of Leadership Engagement, prepares students for the future.

The first CASNR MILE cohort will graduate in May 2019 and the upcoming cohort will be selected fall 2019. The program includes a three-semester-long, intensive schedule that teaches students leadership skills, professional development, and experiential learning opportunities. Only 14 students throughout CASNR are selected each year and experience an intense, but rather rewarding, program.

Anevay Sanchez, from Odessa, Texas, is a senior natural resources management major at Texas Tech. Sanchez said her confidence has increased significantly because of this program. She has learned many things, but her favorite has been learning to believe in herself.

Along with gaining her confidence, Sanchez said everyone has a role to play when it comes to teamwork. At the beginning of the program, one of her weaknesses was collaboration and learning what her specific role was in the MILE Program.

“Being able to be part of a team and given a role to play is one of the leadership skills that I have learned,” Sanchez said.

As a member of the CASNR MILE Program, Sanchez has gained exposure to people in various careers and real-world experience. Sanchez said she applied to be part of this program because it encourages professional development and networking opportunities. She said as a young adult, these experiences are beneficial before starting a career.

“Professionalism is a key part of the MILE Program, and we have had a lot of exposure to many different parts of the industry,” Sanchez said, “all the way from farming to politics, and that has helped us so much.”

Some of the activities they utilized was professional etiquette, personal leadership, and cover letter and resume critiques. Sanchez said the first two semesters of the program were busy and required so much of her. She said when it comes to the program in general, almost all of your time, energy and work should be invested in it completely. For the upcoming cohort her advice is simple.

“Don’t be intimidated,” Sanchez said, “it is good to get involved, but don’t overload yourself.”

Upon graduation, Sanchez is applying to multiple law schools, but she is holding out for Texas Tech’s Law School. She wants to get into legislation and regulation because of the meetings she attended on the MILE’s trip to Washington D.C.; she was immediately sucked in.

Hagen Wright, from Idalou, Texas, is a junior natural resources management majorat Texas Tech. Wright has a possible future in law ahead of him and he is ready to get involved in leadership at Texas Tech.

Wright said he really wanted to get involved at Texas Tech, but being a transfer student, he was unsure how to get started. The CASNR MILE Program was new and intriguing, and he liked the idea of developing his leadership.

“You have to be open to meeting new people,” Wright said, “and hearing their ideas.”

Wright said being in this program, people skills are brought to the surface of your expertise. He said you are constantly meeting people, creating interactions, and forming relationships.

“Keep an open mind, you will see and meet people with a lot of different leadership approaches, and a lot of different ideas about policy,” Wright said. “You also need to see where everyone is coming from, especially in the agriculture industry because it is so diverse.”

There are many different groups of people in agriculture and those groups want to accomplish great things, Wright said. With determination in his eyes, he said we have to be understanding with one another.

“Multiple groups in agriculture have different goals,” Wright said. “We all have to work together to get something done, so just stay open minded.”

Wright said his absolute favorite person he met, through the program, was former Texas Tech University System Chancellor, Robert Duncan, at the Texas Capitol in Austin. He said Duncan was inspirational and taught the cohort about his leadership strategies. Wright said the MILE program was involved and learned how everything worked in the state government.

“Getting legislature passed in Austin and politics is very complicated and intermingled,” Wright said. “Out of everything we learned in Austin, I would have to say the most important is how essential relationships are, with not only people who you met in college, but people you meet in your clubs.”

All of the agricultural people in Austin have to stay really close and connected to get tasks accomplished, Wright said. During their trip to Austin, Wright and the rest of the mile cohort enjoyed participating in Texas Tech’s System Day at the Capitol. They got to learn about Texas Tech’s brand-new veterinary school, hear goals for the school, and how the government plans to accomplish those goals.

“I would definitely say it was worth it,” Wright said. “It’s an experience and opportunity you aren’t going to get anywhere else.”

Wright went on to explain how being in the CASNR MILE program is tough yet rewarding. Wright said the last three semesters were intense, but they set him up for a successful future.

“I would not be the same person today, if not for this program.”

With a soft smile, Wright said the MILE program has done so much for him, but most importantly has given him a sense of direction. Wright went on to say some people know exactly what they want to do, but this program helped him focus on his future, and develop a direction for his career. With determination, he said he now knows what steps need to be taken to get him where he is going.

“I would not be the same person today, if not for this program,” Wright said. “It has definitely bettered me.”

Wright also mentioned how thankful he is for the CASNR MILE Program and how it shaped him.

“The key strength I have taken away is building relationships with people, and realizing the importance of doing the right thing,” Wright said, “such as being involved with what makes you passionate.”

Wright ended with how we, agricultural communicators, need to be pushing forward, innovating, and trying to make things better. He said to never be stagnant.

“Things are always changing,” Wright said, “so you need to be forward-thinking.”